This 2000 Peterbilt 379 just has “that look”, the perfect combination of jet black paint accented by some killer pin striping and polished bling that will make you look twice if you get the chance to see it in person. Owned by Tim Gosselin, the truck was originally used to haul movie equipment in California until VMAX Truck Sales in Michigan purchased it and put it up for sale. Tim saw it and knew that he wanted this black beauty that’s equipped with a Cummins Signature Series 600 engine and an 18 speed transmission. Tim says he got “hooked on trucking” by hanging around with his dad who has been an owner operator for over 30 years. Tim has basically been around trucks his entire life and says his most memorable experience was making a delivery to NJ with his dad. During the entire trip, Tim saw his dad talking to fellow drivers on the C.B. radio and he saw that trucking was a true source of happiness for him. When they arrived at their destination, Tim’s dad said to him, “Let’s see what you’ve got hot shot!”, telling Tim to back the truck & trailer into the loading dock. After a few “pull-ups”, Tim backed it in successfully. From that moment on, he knew trucking was the career choice for him. He started hauling flatbeds in 2013, and has since then hauled gas, natural gas, butane, and propane with his polished Peterbilt. He operates No Limit Trucking out of Rhode Island and the truck looks right at home in front of the state capital building in our photos, looking like an oversized limousine that the heads of state might take in to review the daily agenda! He credits Charlie Decker from One Arm Bandit Pin Striping for the cool accents that he laid over the truck’s original black paint from 2000! Custom features include the new grille, square front bumper, flat top straight pipes, and painted drop visor. The rear tandems are wrapped in a set of fiberglass full fenders and a custom rear light panel and extra mud flaps put the finishing touches on the rear of the truck. Tim has clear L.E.D. lights all around and they add to the clean, simple, and classy appearance of the truck. He wanted to send a big thanks out to his wife Chelsea and all of his family & friends for their love and support along the way. He also credits VMAX Truck Sales for helping put him in such a cool ride, along with Cumberland Collision, Smithfield Diesel Repair, and CJC Auto Reconditioning for helping him keep the wheels turning & shining at the same time. Tim Gosselin takes a great deal of pride in his truck and he certainly represents the trucking industry with class every time he rolls out onto the interstate! 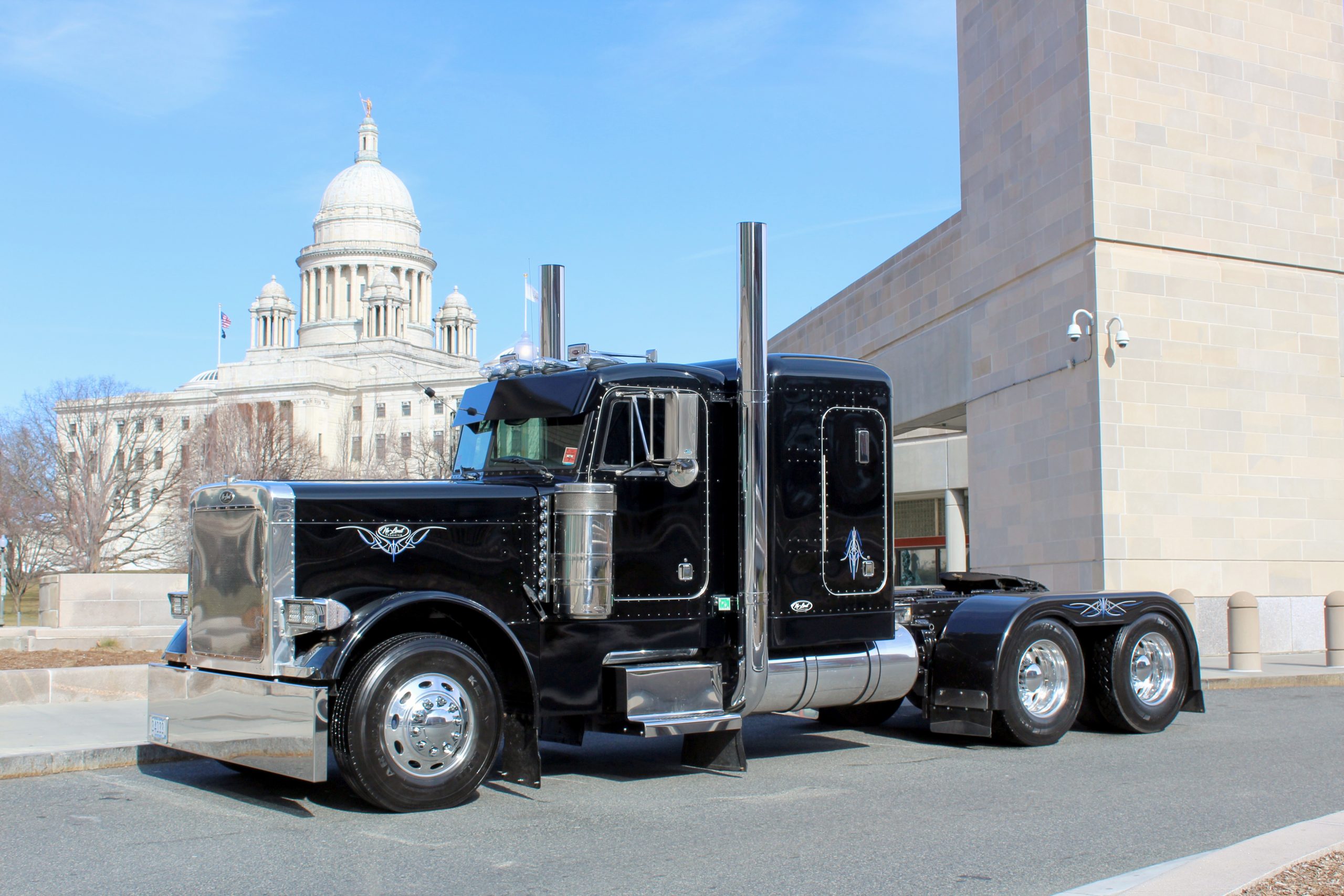 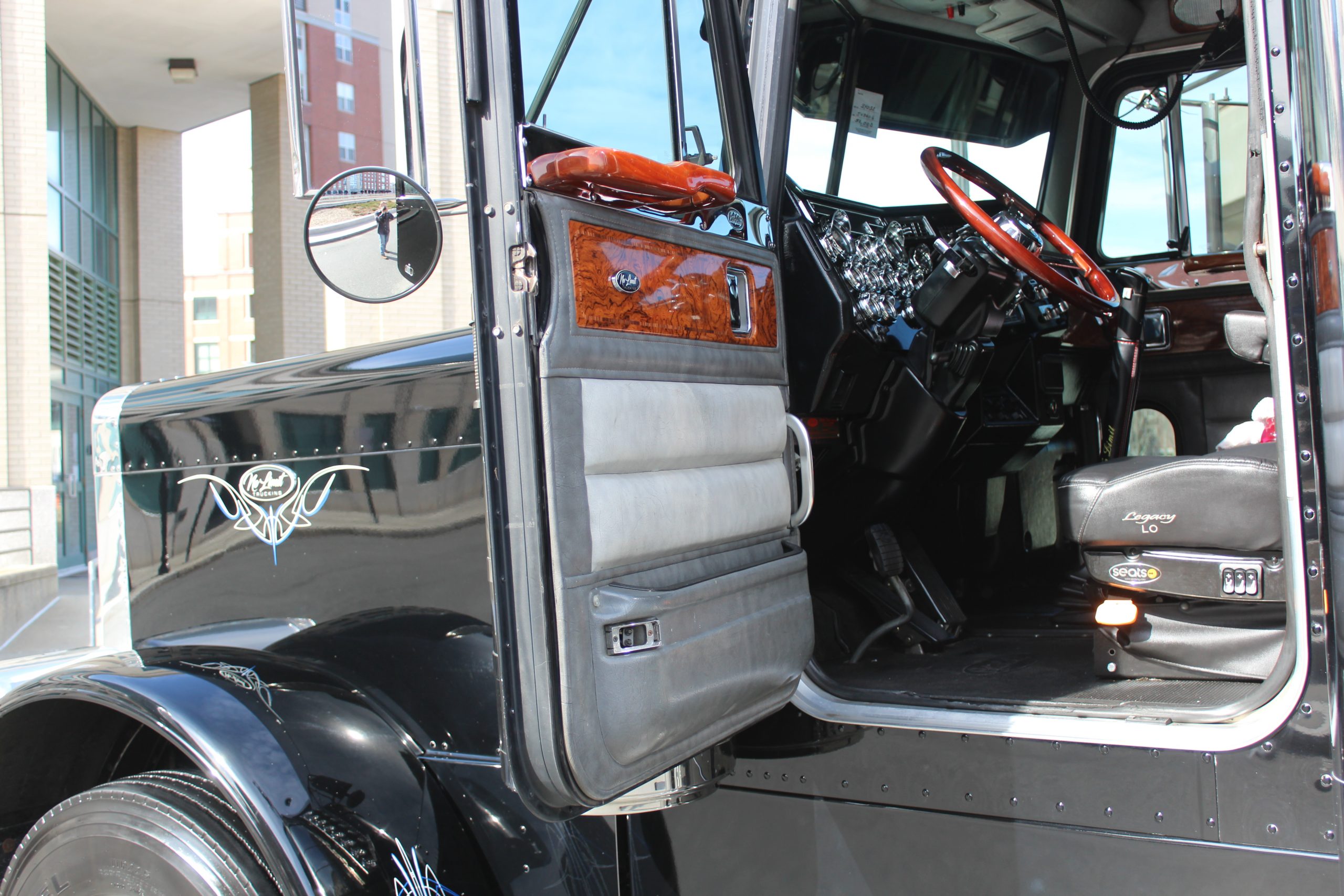 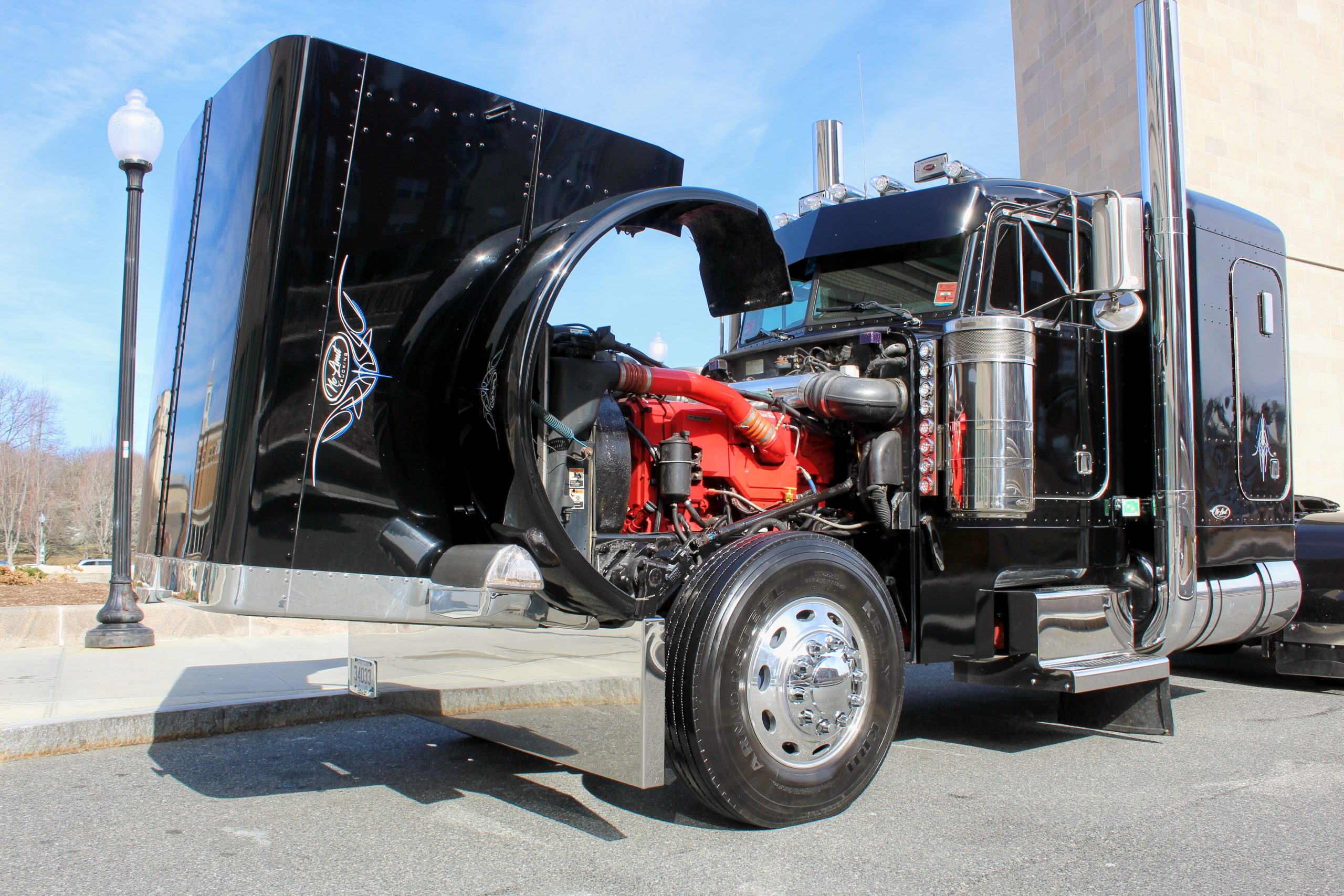 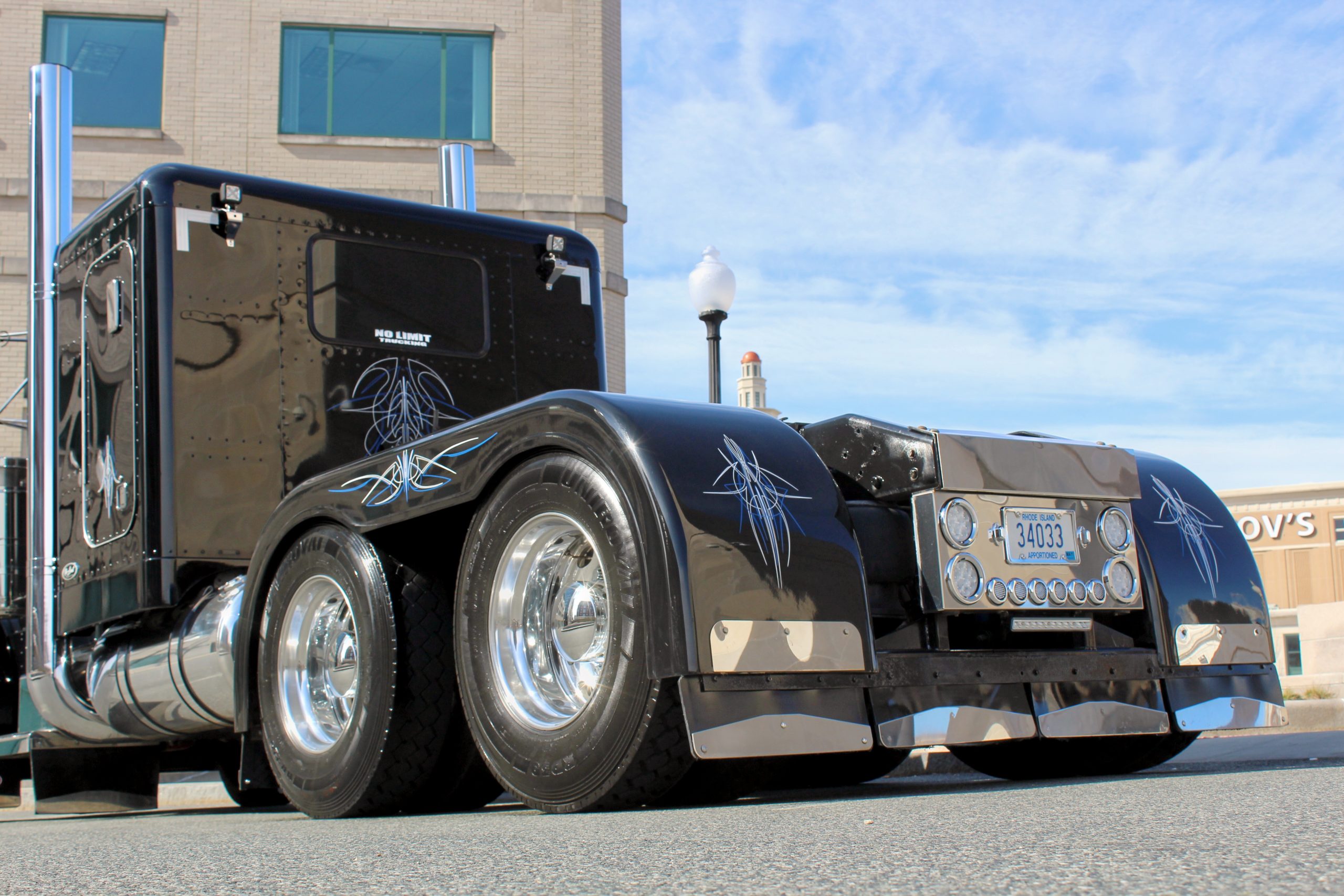 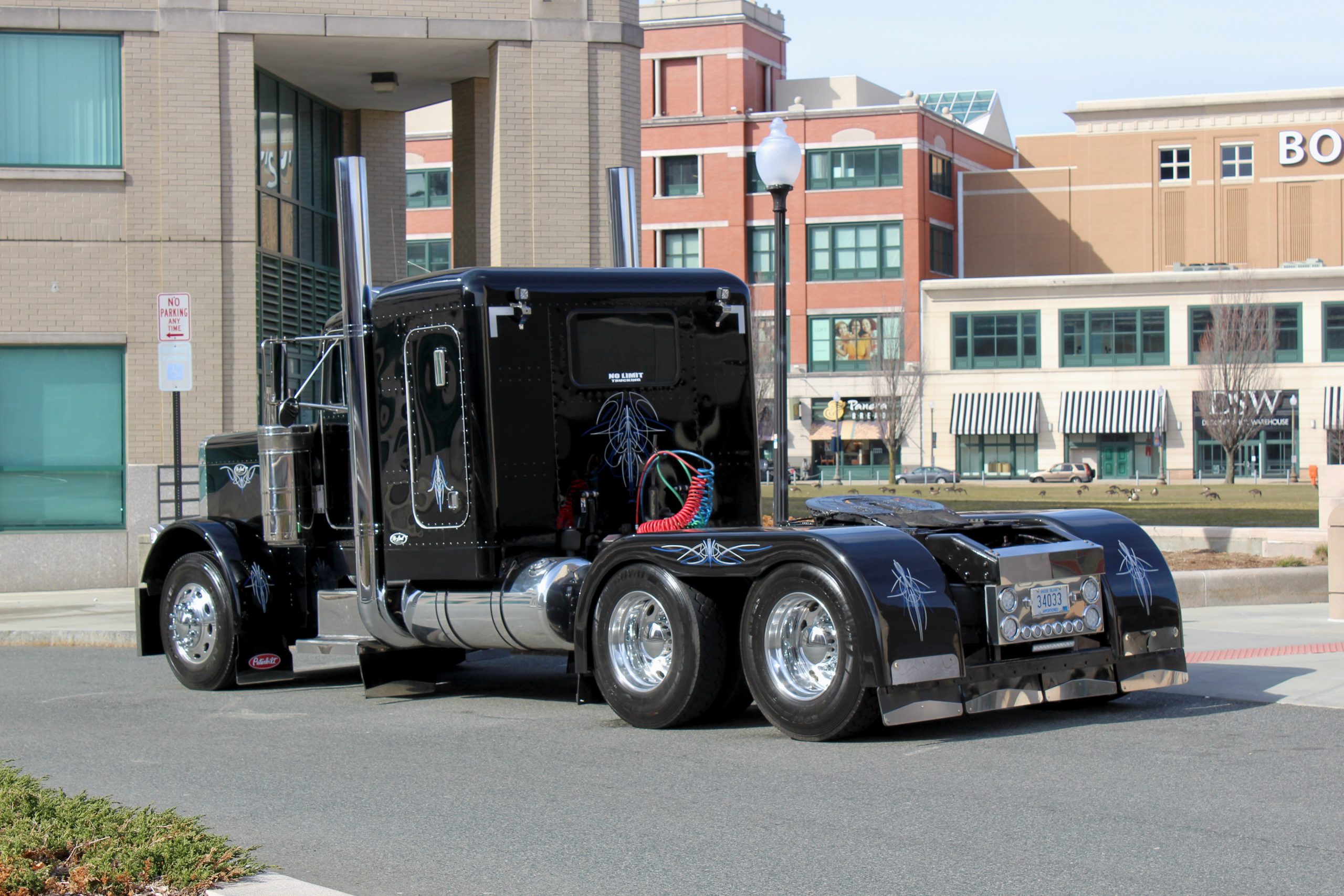 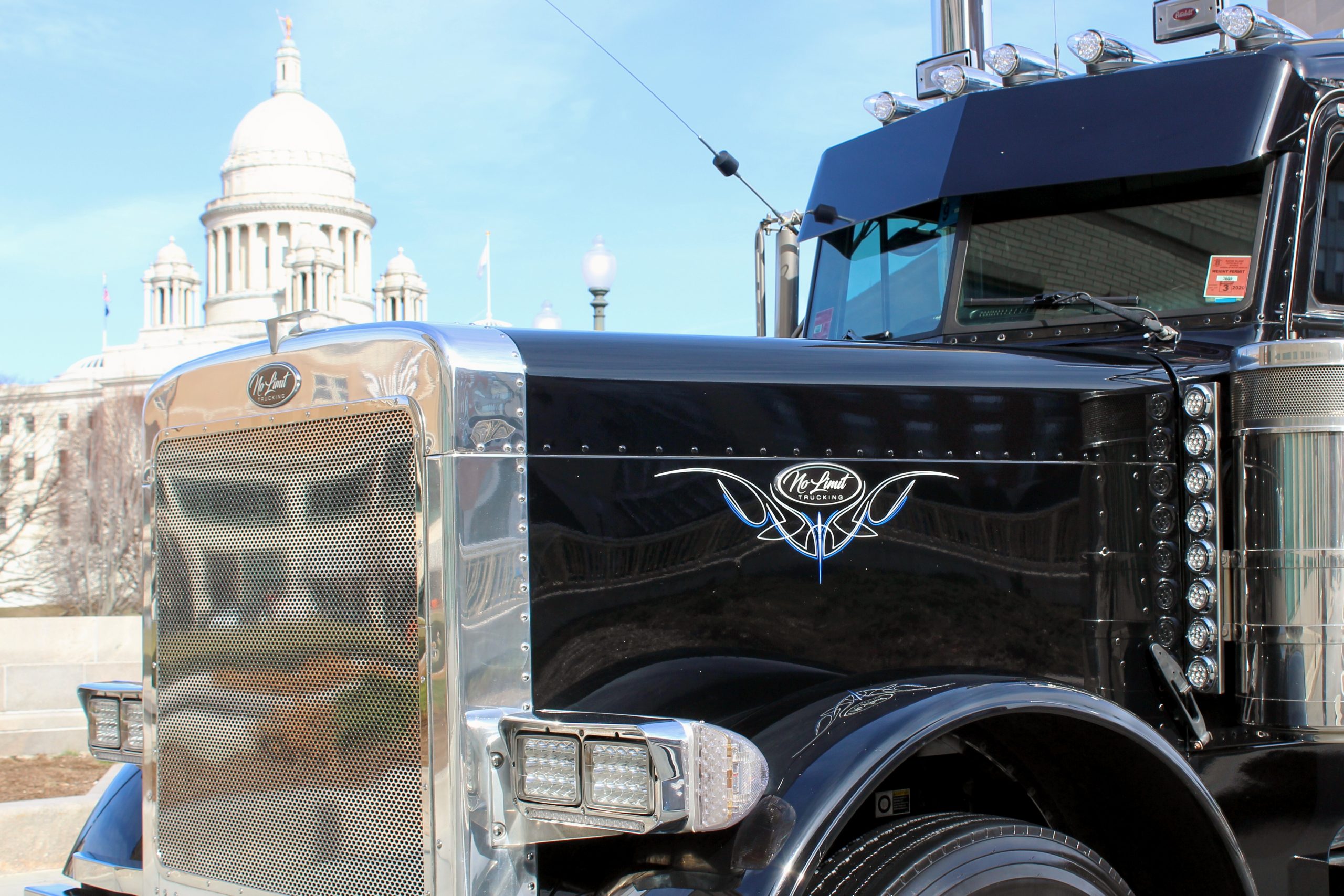 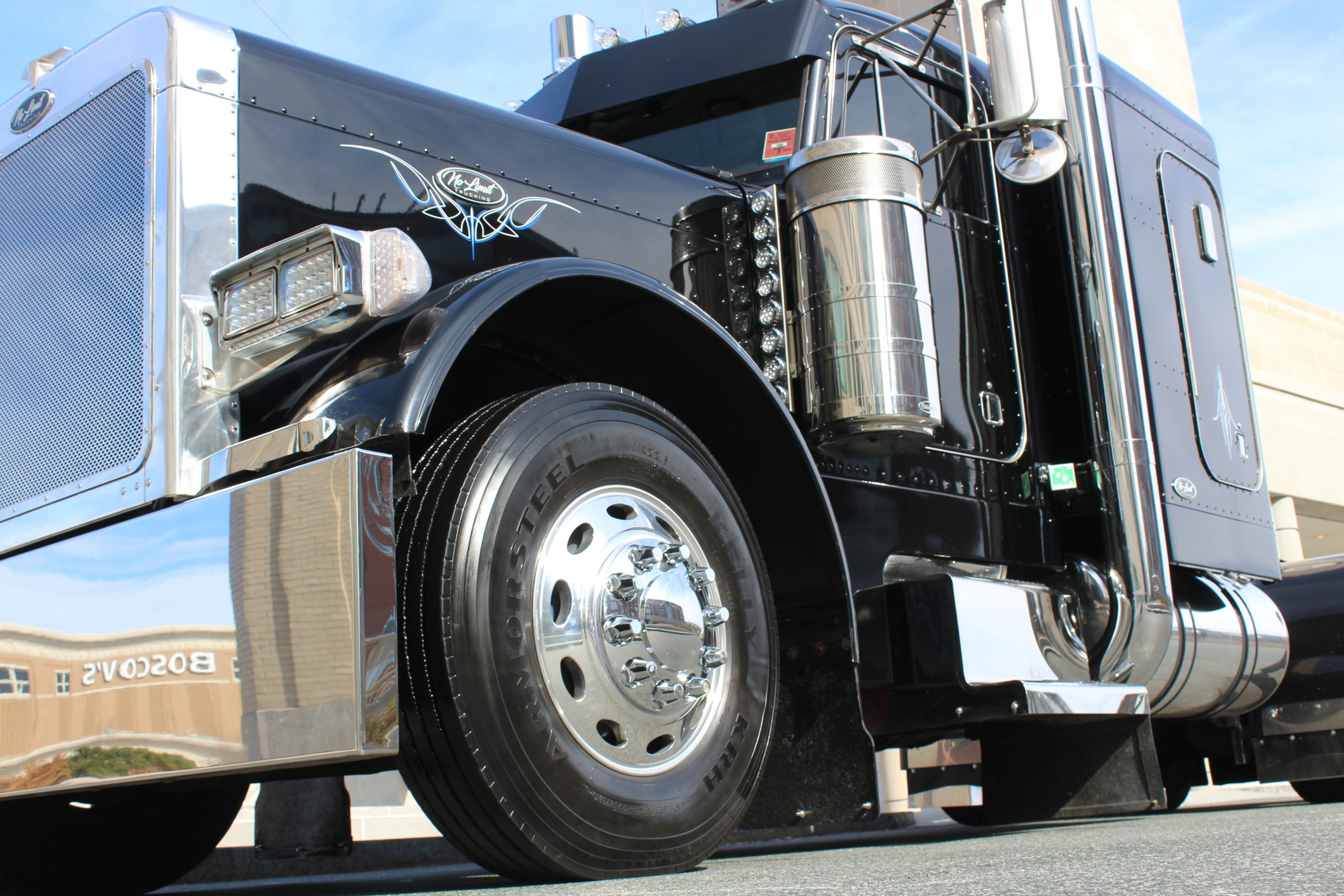